Or Could There Be a Better Way to Address Anxiety?

Bobby McFerrin sang it in 1988, and the song was a grammy award winner, so it must be the way to deal with worry. Just stop worrying. Just decide to be happy. Hmm. Or maybe not.

So if not that bouncy advice, then what? One way to get help with worry seems like no help at all at first, and that’s to ask the question, is there a link between anxiety and pride?

Maybe even asking the question seems a bit offensive. For some Christians anxiety seems like something that comes over you—from outside. It’s a mental health issue and more and more people recognize the need for mental health breaks—entertainers and even athletes have made it acceptable. The theory claims that we didn’t ask for the anxiety, so we cannot have responsibility for it.

This view is akin to anxiety being like a virus that comes from outside and makes us sick, or it’s like a genetic condition that we inherited. Some people are just wired by personality or background to be more anxious than others. In other words, we think of worry as something that happens to us, not necessarily something we do. Or at least we think of the extreme types of anxiety as coming upon us from the outside. And if it comes from outside of us, how could it be related to pride at all?

I’m using anxiety and worry as synonymous terms. Some see anxiety as distinct from worry,[1]Maybe because the Diagnostic and Statistical Manual of Mental Disorders describes it and therefore, professional counselors talk about it as a medical condition. but I believe that what we call anxiety Scripture calls worry. Seeing them as distinct results in Christians assuming worry is sin, but anxiety isn’t. Anxiety might not be sin in all cases, but in some it must be. The Apostle Paul says,

And that is a command. So, we can be compassionate, sympathetic, and understand some nuance is necessary to apply Phil 4:6, but we cannot claim that anxiety is never sin. Some must be or else why would Paul command us not to be anxious about anything?

So… is it possible that worry/anxiety is related to pride? Us worriers (I’m the worrier in my family. My wife seems incapable of worry 😉 ) don’t like to consider this.

Verse 6 commands humility and verse 7 talks about worry. First Peter 5:6-7 are one sentence in the Greek New Testament, so verses 6 and 7 have to be related thoughts somehow. Isn’t this a strange juxtaposition?

You have a dynamic heart that responds to circumstances and situations around you. Sometimes the way a person responds is with worry and anxiety. And 1 Peter 5:6-7 is saying that at least some worry is a manifestation of pride.

Is that hard to swallow? I think it might even be rude to some of us that are great worriers. If that characterization offends you, well, just look at 1 Peter 5:6-7. The humble cast their cares on God. That means the proud don’t. They worry over them.

So if worry is linked to pride as the Apostle Peter says, how might we see that link? I think there are three beliefs and three resulting accusations against God that show the link between pride and anxiety.

The worrier says that were I all-powerful, I would handle this far better than God does. He’s loving and wise, but I guess not powerful. I would do it better.

Who will care for me if I don’t worry about these things? God will. That’s what verse 7 says. You can give him your cares because he cares for you.

We’re told to bring our cares to God in verse 7, but no one would tell his concerns to someone cruel or unkind. But someone that cares for you…. And God is kind; he does care for you. In our pride we think we are the only ones that care about ourselves, but that’s not true. God cares. And his kindness makes the difference.

These three beliefs are all actually arrogance, aren’t they? “Well God won’t handle it as I want it, so I must do it myself. I know best.” Are you god or is God, God? He is not about making your kingdom work. He wants you to submit to his providential rule in your life. He is King.

Anxiety seems like something that comes over us, but Peter makes clear that anxiety is often pride. It doesn’t come from without—our circumstances. It comes from within. You will never grow in your battle with worry as long as you won’t admit it’s coming out of your heart.

But… it’s okay because God cares for you! That’s the promise of verse 7. So we have far more than Don’t Worry Be Happy. We have a God that cares; He actually cares! 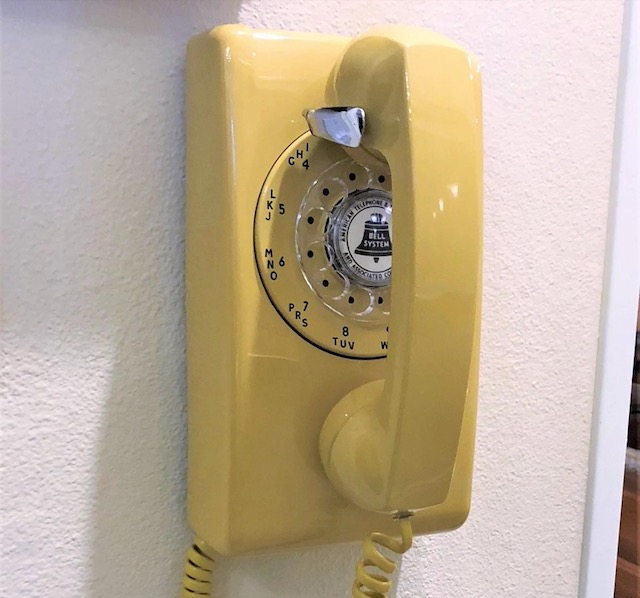 When my dad was a young pastor, he had a few standing rules, but the most important one to me was that if his wife or sons called, we were immediately put through to him. The church secretary knew that no matter what he was doing or whom he was with, he always wanted to take the call. I’m sure the policy was designed especially for my mother, so she could be certain that whatever family emergency her elementary school-age boys caused, she could get her husband. But it applied to all of us.

Probably the only rebuke our church secretary ever received (she was a gem) was after I called one time, and she tried to screen if the probably 12-year-old son of the pastor really needed to talk to his dad or not, and she didn’t put me through. From then on, no matter why I called, she just put me through to my dad. She didn’t even ask why I was calling; she just got my dad on the phone.

Having been a pastor myself, I realize it might not have been a wise policy. I’m sure we interrupted my dad’s study, counseling, and other important pastoral tasks. It’s funny how that affected me. No matter where I was, if I could find a phone, I could get my dad. In an age before cell phones or even the internet, knowing I could grab that harvest gold phone off the wall, dial the church office, and immediately talk to my Dad made me feel special, privileged—membership in my dad’s family had its privileges. I could always get through.

But as comforting as that was, I have a greater Father who has the same policy. When God the Father saved me, he adopted me. I am a member of his family. I’m not a stranger; I’m not an outsider.

Membership has its privileges. The only prayer of the unbeliever that God has obligated himself to hear is the prayer of repentance. But for the believer, God always hears our prayers.

I might have milked the privilege being Harley Keck’s son afforded me and made phone calls that were unnecessary, but my dad still took my calls. And our heavenly Father encourages us to come boldly before him.

I am adopted into God’s family. This means I can always get through. How amazing that the God who spoke the universe into existence always, always hears my prayer. And I don’t have to find a harvest-gold phone to talk to him. 😉 Right now, you and I can talk to him. We are so privileged.

Q: What is prayer?

A: Prayer is an offering up of our desires unto God, for things agreeable to his will, in the name of Christ, with confession of our sins, and thankful acknowledgment of his mercies.

This definition is really helpful, memorable, and applicable.

Prayer is an offering up of our desires unto God…

It’s okay to pray for what you want to happen. God created us as desiring beings and desire alone is not evil. In fact, as we grow in Christ we more and more want the right things. We want what God wants.

So prayer is an offering up of our desires. I hope you don’t pray for things that you don’t care about. Even intercession is about desire. I want the best for others, and I ask God for it. The Bible doesn’t forbid praying for what you want.

Prayer is actually an act of dependence. The proud and independent don’t pray much. So prayer is me recognizing that only God can do what I’m asking for. Only he can fulfill my desires.

for things agreeable to his will…

This is the caveat, isn’t it? The things we want should also be the things God wants. Of course, we don’t always know what God wants. Often His sovereign will is not apparent. What I like about this definition is it doesn’t demand that we know the mind of God. We just need to ask for things that are “agreeable to his will.”

One time on the way to church I saw a portable basketball goal being thrown out. We wanted one for years, but I wasn’t willing to spend the money. I am famously frugal. I prayed that if God wanted us to have it, it would still be available after the worship service.

What things do we know with certainty to be God’s will? Salvation and sanctification for sure. We can pray for those with no doubt. Many other things need to be prayed for with some humility. I don’t always know what God wants.

in the name of Christ…

Why can I pray? Only because Christ has paid the penalty of my sin. My sin separated me from God. The only prayer of the unbeliever that God is obligated to hear is the prayer of repentance. But I can pray because of Jesus and Jesus alone.

Now I don’t believe that praying in the name of Christ means that we add “in Jesus’ name” to all of our prayers. I often do, but it’s not a magic formula that assures you that God hears your prayers. What it means is that we pray with the conscious awareness that we can only come to God through Jesus Christ. This awareness will show up in our prayers. At times we will pray things like, “God, the only reason I can make this request is because Jesus paid for my sins on the cross.”

What this definition of prayer explains is that we can only come to God because of Christ. Don’t ever get cavalier about coming to God. You should have no confidence if you are praying on your own merits. It’s only the merits of Christ that count.

with confession of our sins…

It saddens me that some Christians believe that salvation means they never need to admit they’re a sinner again. That’s just wrong. Sin still indwells you and affects the quality of your prayers. The Apostle Peter claimed that a husband’s prayers could be hindered by his disobedience (1 Peter 3:7).

You and I probably cannot admit that we’re sinners too often. Confessing sin benefits us in several ways.

and thankful acknowledgment of his mercies.

It is good to thank God for His mercies. You have received grace from him today. We’re so blind to God’s overflowing grace and mercy. Gratitude gets us better at seeing moments of His mercy. What can you thank God for already this day?

May you and I pray better and more often.

I have 24 subscribers. [It's a small number, but I just started subscriptions. :)] Join them by subscribing below and get an email update when a new blog is posted.