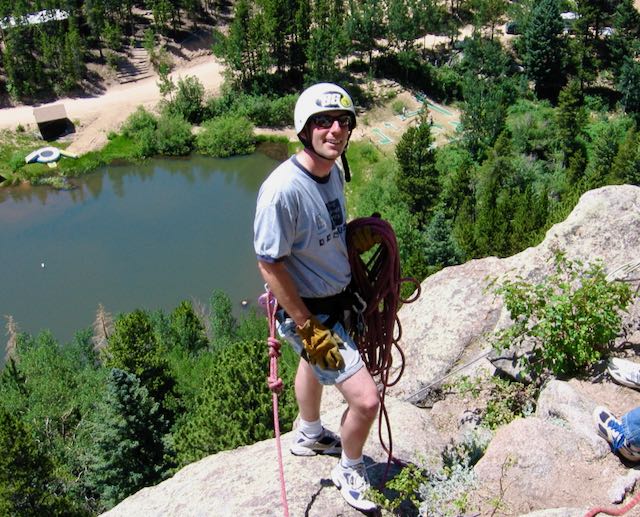 I have two stories that might not seem related, but I think they both illustrate something important in relationships. In my first pastoral ministry the church owned a Christian camp in the Colorado Rockies. It was a gorgeous location with a view of the Continental Divide, and they provided some Rocky Mountain activities like rock climbing. Now I had never rock climbed in my life, but they trained me, and I belayed campers along with the rest of the staff. My own first experience involved me really trusting the rope and the belayer on my way up. When it came time to rappel, I had a hard time taking that first step off the rock face. Eventually, rappelling became my favorite part of rock climbing. With both climbing and rappelling, because I was tied to the rock at the top, I could venture out. I could take a risk. I could scramble all over the cliff face because I was tied to the rock.[1]That’s a vintage pic by the way ;).

The second story is set in my college and seminary years. I had various student leadership positions in the small college and seminary I attended and even in the Christian camp I worked at for five summers. I didn’t reject these roles, but I knew something wasn’t right about how insecure I was in them. I had a hard time taking initiative and risks. In the camp I was eventually put in charge of our comedy sketch show where I felt this stress to make apathetic teens laugh on a weekly basis. It was great when they did, but when they didn’t… it was a long night. I knew something was wrong inside me, but I couldn’t put it into words until I read Ed Welch’s 1997 book, When People Are Big and God Is Small. That was the first time that I understood that I wanted others to like me more than I wanted to please God. It helped me make sense of a lot of angst in those years

I’m thankful that Welch’s book has given many of the college students I disciple a biblical category to describe their battle with sin. One primary way the fear of man shows up is in a fear of rejection. College students won’t pursue relationships because they imagine that it will eventually fall apart, and they might be rejected. This affects potential dating relationships, but it also can affect even godly same-sex relationships. A girl is afraid of starting a potential iron-sharpening-iron relationship because the other girl might eventually decide she doesn’t like her. Guys can think this too. They fear this, and therefore, they won’t risk.

That’s the problem, and Scripture has the answer to it. One passage to consider is in Ephesians.

“Beloved” is a term of affection for Jesus Christ. He’s the darling and special Son of the Father. So you being in the Beloved means you are in union with Christ. The New Testament often says we are in Christ or He is in us. It means we have a union with Christ that allows us to receive all of these spiritual blessings from God. It’s in Christ that God has poured out his grace on us.

Jesus is the supreme object of God’s love—that’s why he’s called the Beloved. Since we are in Christ, we are also the objects of God’s love. Do you wonder why God the Father would ever love you? I’ve wondered that about myself. It’s because He loves his Son, Jesus Christ, and you are united to Christ. I’ve blogged before about the practical blessings of our union with Christ (see here and here).

Identity in Christ fuels vulnerability. Because you don’t fear being rejected by the Father, you can handle rejection from others. God won’t ever reject you because he won’t reject his Son. So, like a rock climber, with that anchor point, you can venture out and hazard relationship with others. They might reject you, and that is not preferable. We all prefer people loving us to hating us. But it also doesn’t have to be devastating. Your relationship with the Father is most important, and it’s secure.

If you’re not vulnerable, if instead you’re self-protective, could it be that you don’t see the security of your relationship with the Father through Christ? But if you do, you can be vulnerable with others. Your identity in Christ can motivate vulnerability with others.